Leon Helfet was born in Poltava in the Ukraine in 1879. His family emigrated from Russia to England and established a new home in Liverpool. Leon joined an evening class at the age of 17 at a Jewish public school to learn English and fell in love with his 16 year old teacher Sarah Levin. At the age of 17 he proposed betrothal to the beautiful Sarah. Conditions in Liverpool in the 1890’s were depressed and Leon left for South Africa, Cape Town shortly after his 19th birthday to look for a better future. He told Sarah that he would send for her when he was established in a few years time.

As jobs were scarce, he was advised and mentored by the representatives of the local Jewish Community to establish a business and they also gave the young beginner traders advice. After a false start selling picture frames in Worcester, he was told about the village of Calvinia and its enormous district which still offered great potential and opportunities to business men willing to take their merchandise to the farmers, and also to buy their produce. Leon then settled in Calvinia and started a small shop in Water Street, which later became one of the largest businesses in the North West Cape.

The Anglo Boer War broke out and Calvinia became a British garrison town. The village was left almost unscarred although a number of farmers suffered damage and losses. Shopkeepers were kept busy supplying the British forces with foodstuffs, tents, wagons, mules, horses and many of their other requirements. As a result, brisk and profitable business brought boom conditions to the traders and Leon was finally able to afford to design and build a home for his betrothed Sarah.

Construction of the home, called ‘Carmel Villa’ (named after Mount Carmel in the Holy Land) began in 1904. Leon designed the house studying some of the beautiful Victorian houses in Cape Town and adding some design elements from his memory of Ukrainian houses. He contracted 2 Russian Jewish brothers to build for him.

The Victorian/Colonial house, the first of its type in Calvinia, has a high pitched roof constructed of gauge corrugated iron covering an enormous loft designed to cool the building. Wide stoeps on three sides of the house were gaily decorated with “brookie-lace” (Victorian iron pattern work) under the rainwater gutters and supported by fluted pillars with a very heavy ironwork front gate depicting fruit and flowers. All the wood – Oregon pine and iron and “brookie-lace” was imported from England per ship to South Africa. All building material was transported by horse wagon from Ceres at a cost of one pound per hundred lbs weight. Railhead alone added to their original cost in England and shipping and rail charges, as you can imagine, added a fortune to the very large sum paid for this beautiful home.

After 7 years betrothal, Leon was finally able to send for Sarah and they were married in the Old Gardens Synagogue in Cape Town in 1905. After a honeymoon in the glorious Cape Peninsula, the happy young couple then embarked on the momentous trip of 5 days – 250 mile journey to Calvinia.

They travelled first by train to Eendekuil (150 km) and then by light, covered and sprung wagon drawn by 4 horses accompanied by their suitcases, boxes of wedding gifts and trunks containing Sarah’s trousseau.

It was mid-summer and very very hot. Sarah’s “English summer clothes” of fashionable high-necked, long-sleeved gabardine dresses over tight corsets, proved very far from comfortable. The beauty of the veld was lost on her as they zigzagged up the Pakhuis pass and through the dusty heat and winged “goggas” of the Karoo. During one of their may stops for leg stretching and for the horses to have a breather, the young bride found a rock under the skimpy shade of a bush and, easing herself into it, said sorrowfully “Leon you carry on and leave me here to die, I have had enough!” She was persuaded to continue, and after the fourth and final day of the journey they arrived at the home of Mr and Mrs Rooi Willem Louw, great friends of Leon’s at their farm Soetwater 30 kms from Calvinia (The Louw’s daughter was to become the wife of DF Malan half a century later). After a very comfortable night, a great surprise awaited “die Engelse bruid” when they emerged from the farmhouse the next day.

Their uncomfortable wagon had been replaced by a gleaming Landau pulled by 4 horses bedecked with ostrich plumes which was to take them the last 3 hours of their journey. The owner, Oom Tienie van Wyk, who as a well known Calvinia friend of Leon’s had lent the vehicle (the only one in the district), with his show horses and suitable dressed driver as a welcome gesture to the young couple. To add to this splendour, 6 young male friends from the village had arrived on horseback to provide a guard of honour to accompany them home. As the procession set off at a brisk pace, they raised their rifles to fire salvos of salutation. They finally all drew up very grandly in front of the ornamental gate of “Carmel Villa” which was gleaming in its newness. Above the front door was an ornately painted white canvas “Welcome Home” banner. This same banner was re-used for many years after every family member returned from holidays.

Leon led Sarah over the threshold of the home he had designed and built for her. It had a long passage which led into a large dining room furnished in polished mahogany and they found the oversized table in the centre of the room, groaning under the enormous display of local “lekkernye” which had been baked by the ladies of the town.

The spacious new home was delightfully comfortable as the high pitched roof, loft and high ceilings kept it cool during the hot summer days. Leon also opened Helfet Motors and De Boere Winkel. He sold the first “black” Ford over his counter.
In 1948 the Helfet family decided to leave for Cape Town.

Courtesy of the Calvinia Museum and Mrs Botha 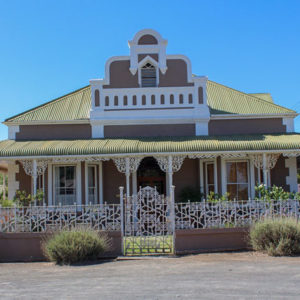 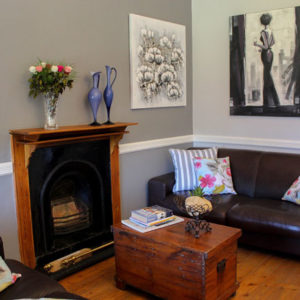 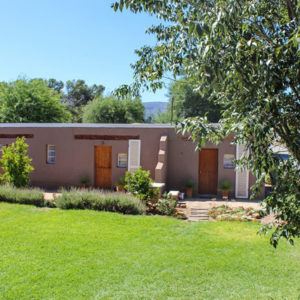